We study the mechanisms of two essential nanomachines of gene expression, RNA polymerase II (Pol II) and the spliceosome, using brewer’s yeast as a model system.

Our work on Pol II focuses on transcription termination as a strategy for gene regulation. In the 1990’s we discovered a pathway that uses the helicase Sen1 and a collection of RNA-binding proteins (including Nrd1 and Nab3) to terminate Pol II transcription within ~500 base pairs from the transcription start site (see figure). This “NNS” pathway produces short non-coding RNAs, such as snRNAs and snoRNAs, and also regulates mRNA synthesis by attenuation. We use genetics, genomics, cell biology and biochemistry to define the mechanism and targets of the Sen1-dependent termination pathway. Currently we are investigating the function of the poorly studied RNA-binding protein Hrp1 in the NNS pathway and trying to discern how mutations in the Rpb11 and Rpb3 subunits of Pol II result in defects in NNS terminator recognition. Our goal is to develop a structural model of the Pol II NNS termination complex. 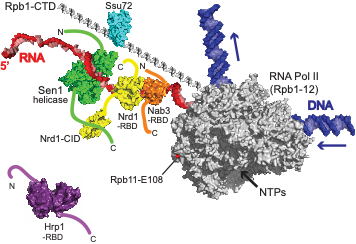 Our studies on the spliceosome focus on U6 snRNA and the dynamic RNA-RNA and RNA-protein interactions required for its pairing with U2 snRNA and the intron during activation of the spliceosome for intron excision. U2 and U6 snRNAs make up the catalytic core of the spliceosome and align the intron sequences for the first step of splicing. Before that can happen, U4 snRNA must be unwound from U6 by the helicase Brr2, which is a component of the U5 snRNP. Another U5 snRNP protein, Prp8, regulates this process. We discovered a mutation in U4 snRNA, U4-cs1, that arrests U4/U6 unwinding at low temperature. Isolation of genetic suppressors of U4-cs1 identified amino acid residues in five proteins, including Prp8 and Brr2, that regulate this process (see figure). We are currently using biochemical and genetic methods to better understand the mechanism by which these proteins and RNAs transmit allosteric signals more than 70 Ångstroms across the spliceosome to enable the large conformational changes required for spliceosome activation. 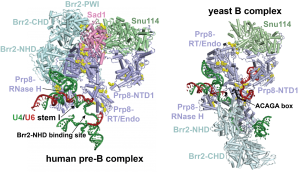 Evidence indicates that U4-cs1-containing spliceosomes are stuck in the “pre-B” conformation (left) at low temperature, in which Sad1 (pink) keeps the Brr2 helicase (light blue) away from its binding site on U4 snRNA (green), preventing its displacement from U6 snRNA (red). U4-cs1-suppressor mutations (yellow spheres) allow the pre-B to B transition to occur at low temperature, resulting in rotation of Brr2 and docking of its N-terminal helicase domain (NHD) on U4 snRNA in preparation for unwinding of the U4/U6 helices (right).